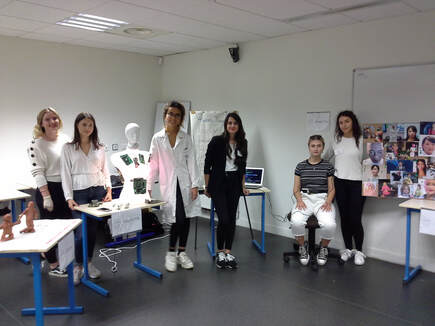 Then in the second stage, entitled "Prototype", we could see a humanoid "skeleton" whose bust was made up of a motherboard, electronic circuit, cable and whose middle was hollowed out so that a light bulb could be placed in it in order to recall a human heart. The whole was surmounted by a polystyrene head connected to the bust via the nape of the neck. As in the previous stage, the work was accompanied by an engineer who was able to explain the production process in detail.
The next stage, which is the third and which is called "Design", featured a designer who was finalizing the creation of their humanoid robot. The designer in charge of the robot entered into communication with the latter and presented the robot to curious visitors, demonstrating their technology by exchanging with the robot using simple sentences such as "Can you introduce yourself? "or "What's your idol". But that's not all, because at the end the visitor was also allowed to ask a question! In this way the students were able to put forward the axiom "One cannot fail to communicate" of the Palo Alto school.
Finally, in the fourth stage, entitled "Invasion", visitors could become aware of the importance of humanoid creations in today's society thanks to a participatory animation where the visitor had to guess from a photo-montage which ones were humans and which were robots. An animation that never failed to surprise the visitor because he never suspected that all the photos were in fact Androids!
Completely surrounded by these robots and engineers, the spectator could experience the spirit of the Bauhaus.
Moreover, this exhibition raises the question of the future of the human android relationship". The students were able to bring some elements of answer to this question by using various concepts such as the axioms of the Palo Alto school which tells us that "we cannot not communicate", "the symbolic" by Jean-Michel Besnier, François Ansermet’s concept of "plasticity", Serge Tisseron’s "empathy" or Antonio Damasio’s "emotions". All these concepts from the Information and Communication theories tend to show a certain fear of technological advancement where machines would surpass men from an intellectual, communicational and emotional point of view if we are able to reproduce neuronal plasticity, which would allow them to assimilate knowledge much faster than a human being. However, even if this is only the beginning of the answer, other questions are already emerging, one of which should be of great concern to us: "Do we really want to envisage a future in which the human race is replaced by robots? »