The Myth of the Martians 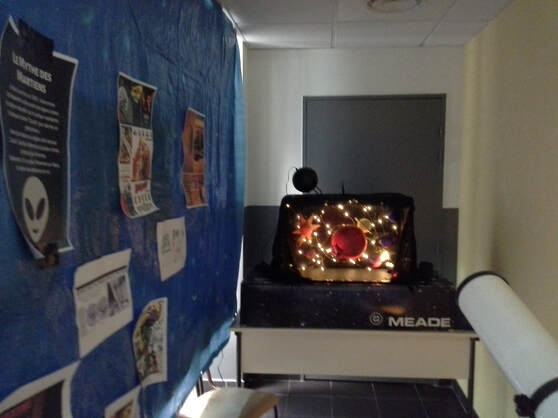 They created a true cosmic and celestial atmosphere by creating a "confined" place with sheets and tarpaulins hoisted in the corner of a classroom. This exhibition is immersed in a Martian sound atmosphere thanks to the music of the X-files series, and visual display of a star projector and a telescope.
The total artwork, inspired by the Bahaus movement, was composed of several "workshops".

The first consists of a medium representing the solar system at the center of which featured the planet Mars. It is represented with, on one side the natural channels and on the other, supernatural channels, i.e. the Martians. This medium was built with several materials: cardboard, paint, glitter, and a garland of light. The solar system was built with polystyrene balls.

The second representation focused on the Martian culture. On the left side of the confined area, film posters and recent newspaper articles were displayed to show that there is still today a real culture around this myth.

The third display a play. This play, performed by the students, traces the entire history of the myth of the Martians from its creation to the mass culture that this myth represents today. The students put themselves in the shoes of a narrator, Giovanni Schiaparelli, a historian, a journalist, a cultural affairs director expert in Martian art and a communication specialist. The intervention of all these characters allows the visitors to understand the real stakes at the heart of the creation of the myth and to learn about several anecdotes related to it!
The objective for this group of students was to plunge their classmates into the heart of another world to better understand the myth of life on Mars.
The students carefully planned the trajectory of the visit of their exhibition that enabled the visitors to experience the birth of this true culture. When visitors appear at their booth, the students engaged with them by asking a simple question: "Do you know the story of the birth of the myth of the Martians". Through this interaction, visitors are led through the different displays described above, which allow each visitor to be immersed in the atmosphere created by this myth and the way it was disseminated. The exhibit is very creative and playful, as it unfolds in such a way that there is interaction with the audience so that they can immerse themselves in this supernatural world and learn more.